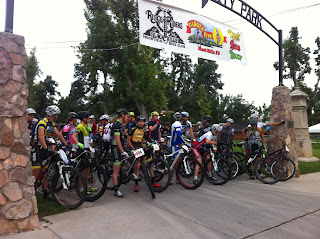 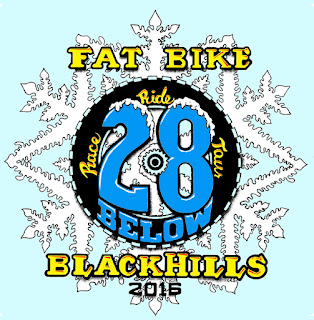 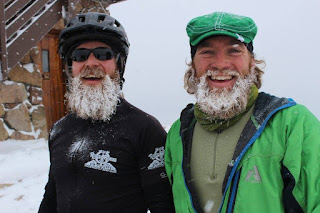 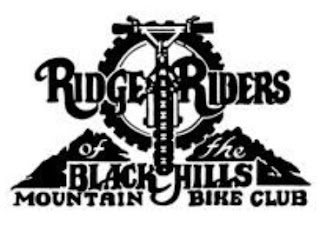 The Black Hills are getting Fatter! 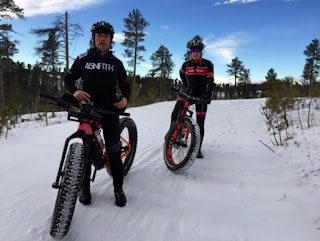 Even with a below average snow year,  we have plenty of POW for Fatbiking in the Northern Black Hills. We've been taking full advantage of that, with some sweet new fat-track located just 10 miles outside of Spearfish, at the Big Hill trailhead. With around 12 miles of rolling, burmed out trail, the parking lot is getting filled with bikers from all over the area. If you haven't tried it out yet, you are MISSING OUT!! We've been riding it every chance we get, and with varying conditions, we never get tired of it.
We were even graced with the chance to ride with  endurance champ Jay Petervary (pictured above) on the local trails! 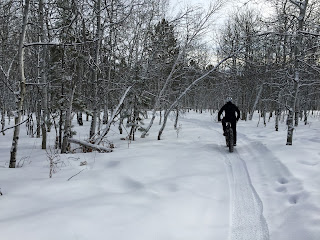 With the growing population of Fatbiking we hope to draw out some of you racers/riders to the 28 Below race, happening on March 19th, 2016 at Spearfish Canyon Lodge to celebrate the last weekend of winter! We've made a small change to the race, making it a fatbike only event, as we are no longer doing the snowshoe/ski portion. We have also hired artist extraordinaire Les Heiserman to design this years T-shirt! His custom designs are always top notch, so don't miss the deadline, as T-shirts will not be available to anyone registering after the 28th of February! The 28 Below course now consists of 30 miles of groomed snowmobile trail (due to an added 2 miles from a route change by the snowmobile assoc.)  and it isn't easy to finish, but it feels great when you do!  And after the ride we'll have Crow Peak brews, food, and live music to enjoy while we wait for the awards ceremony to kick off.  Thanks to great sponsors like Salsa Cycles, Twin Six, Quarq, Acme Bicycles, Rushmore Mountain Sporst, and Two Wheeler Dealer, we'll have a table full of prizes that you may be lucky enough to win!
And thanks to Spearfish Canyon Lodge, we have a great venue with the race starting and finishing right out the front door. It's going to be a good time, so sign up early and get yourself
motivated to ride.
Speaking of sponsors, we just got a new one and you may have heard of this new bike bag company starting up called Dirt Bags.  Our nephew Heath Brown, based out of Laramie WY, is the founder of this new company and graced us with a few demo bags that I am thoroughly enjoying! 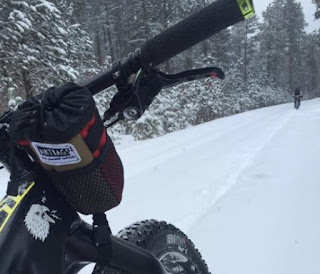 The feedbag pictured above is a great place for an insulated water bottle, food or other items that you like to carry such as a lighter, ibuprofen, gels and other small pieces that will fit in the front or side mesh pockets, giving you easy access to supplies.  Or go with a larger feedbag as pictured below that can accommodate up to a 32 oz thermos. 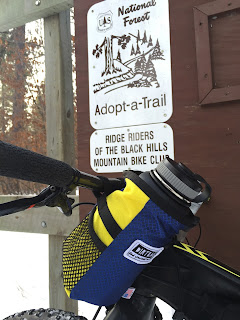 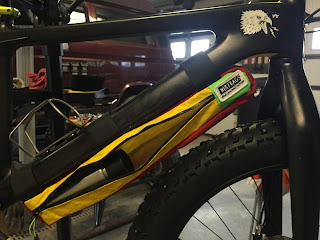 A down tube bag is a great addition for carrying an extra thermos, pump and tube, or tent poles if you are doing an overnighter.  Beers fit nicely in there as well!! 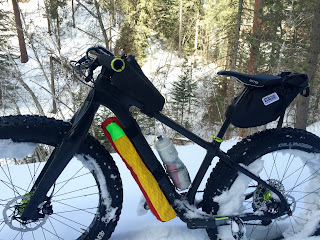 If you don't own any bags, I highly suggest getting some as they make storage for everything you need much easier, and you don't have to carry that heavy camelback around.  Theses bags make a lot of storage available for extra clothing/layers as well.  The rumor I heard is that Dirt Bags is working hard to be ready to take orders for bags by the end of February.....just in time for the 28 Below!  They will be making some great custom bags with custom colors, so make sure to check out their facebook page, or website  for updates and information on the bags!  Pedal POWder!
Posted by Ridge Rider at 5:30 PM No comments: 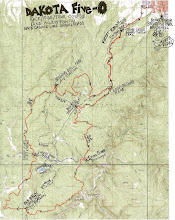